Home Excerpts Breaking Even – Before The Story Ends Album Review

Breaking Even – Before The Story Ends Album Review

Coming from Kansas City, KS is Breaking Even. Breaking Even is a 4-piece Alt. Metal band that is up and coming. What do they bring to the table? What makes them worth a listen? Hopefully by the end of this small review you have answered those questions for yourself. As always it’s up to YOU on what you think is good music.

The album is entitled Before The Story Ends. With all those useful facts out of the way lets jump into the sound of this album. Holding out an amazing 9 tracks, DJ’s vocals are through and through consistent and appropriate to the track thus giving Breaking Even their vocal identity.

Shifting gears into Ben’s drums which all around shout persistence and many days and sleepless nights of perfecting to create that punching force behind the string sections. Mainly DJ provided the crunchy bass riffs for the guitars to build off of which is definitely a underlying presence to parts of the songs adding what the other instruments may lack. Pete’s guitar work is top notch as well providing a groove that compliments everyone’s role in the studio.

Talking with the drummer Ben, I learned a wealth of the heart, soul, and physical limits that were pushed to create Before The Story Ends. Moving on to the theme of the album my interpretation was that of not giving up and Before The Story Ends. Not letting the ups and downs of life affect your goals and mission. 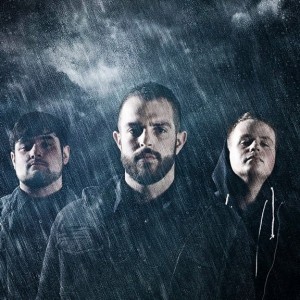 Even going into tracks like All The Time that just shouts “I’ve had enough!” and not holding someone’s hand through every situation. As cold as that sounds, this is a true fact in life that sometimes we simply have to stand on our own two feet and face reality. We can help others and we can be helped, but we should never intend to be a burden on someone we care for.

With those themes I’ve gathered from this album there is a lot of real and raw content on subjects in life not often sung about. With each member providing vocals it’s all the more so that the band agrees on each song topic.

My Overall Thoughts: This is album that marks 2014 as a great year in rock and metal music and shows that bands are a plenty out there with a heavy sound and can still write meaningful songs without using heavy as a gimmick. Breaking Even is a band that displays raw talent and songwriting skills worthy of attention.

Stay tuned for an interview in an upcoming issue so you can hear the facts from Breaking Even and not just my thoughts. Until then, feel free to check out their Facebook at: www.facebook.com/breakingevenkc

This is a band worth checking out just for the rawness of the overall sound, there are even some sweet solos to be heard. You just have to find out for yourself. Before The Story Ends by Breaking Even is available now and check the Facebook on how to get yourself a copy and feel free to drop these guys a message if you want to they don’t bite I promise…Well I can’t promise but trust me they are willing to talk with fans.

Personal Favorite Tracks: Above The Grey, All The Time, Before The Story Ends, Alive.